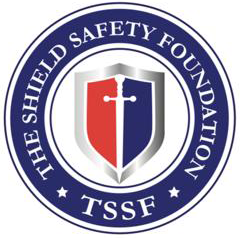 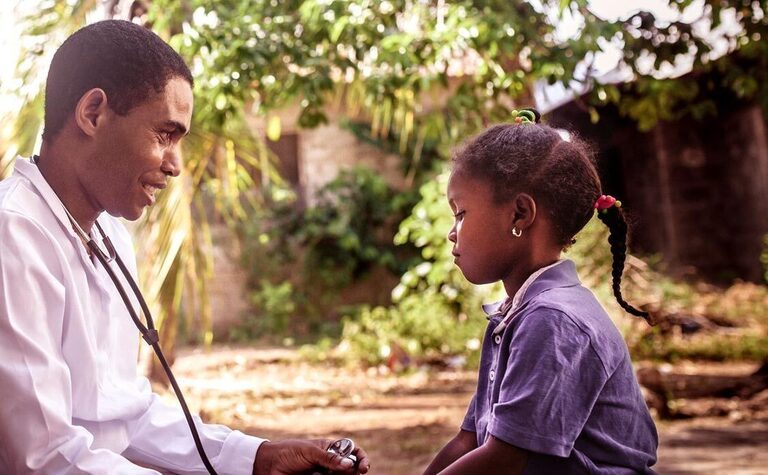 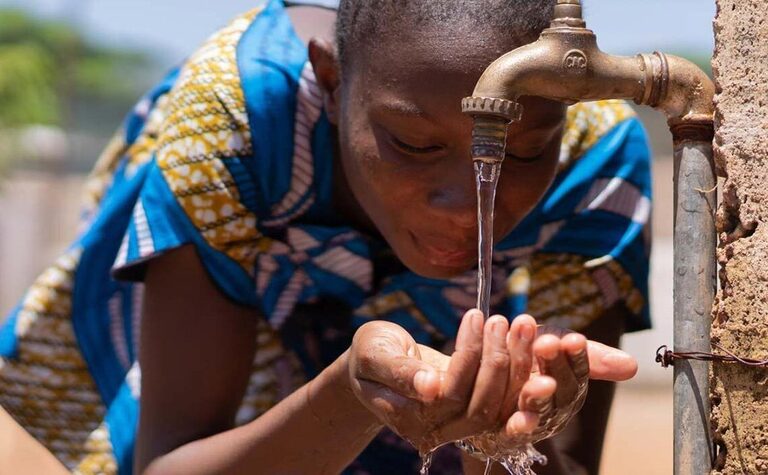 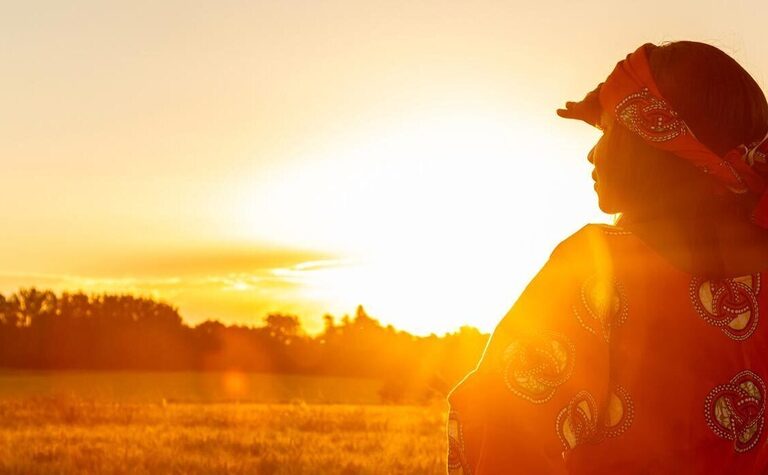 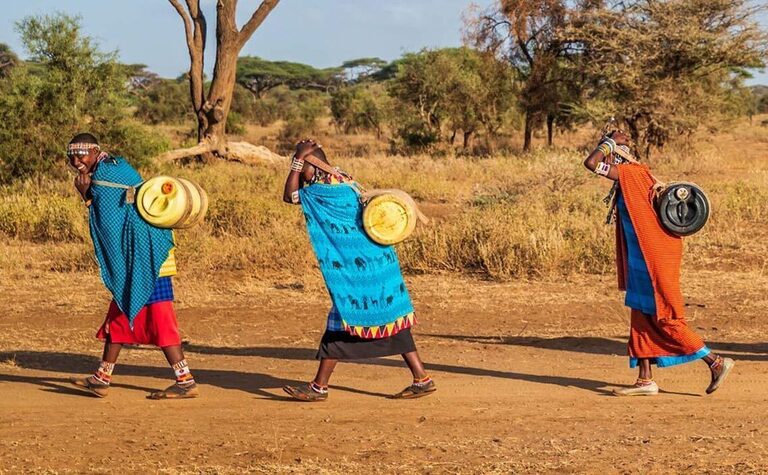 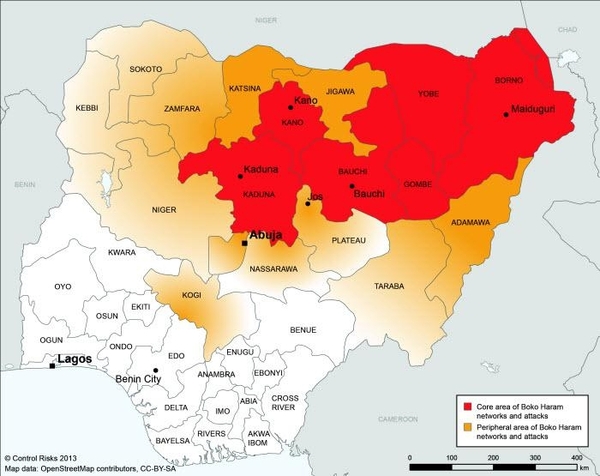 
Everywhere in Nigeria
Terrorists are very likely to try to carry out attacks in Nigeria. Attacks could be indiscriminate and could affect western interests, as well as places visited by tourists. Most attacks are conducted by Boko Haram or Islamic State West Africa (ISWA) and occur in Borno, Yobe and Adamawa States in the North East.

Humanitarian staff and assets have been targeted during attacks in the North East, including in garrison towns and on roads. Humanitarian sites have also been targeted. There is a continued threat from extremist groups operating in the region. The al Qaeda-linked terrorist group Jamaat al Ansar al Muslimeen fi Bilad al Sudan, better known as Ansaru, has previously carried out attacks and kidnappings, including that of westerners, across northern Nigeria. The most recent attack was in mid-January 2020 when Ansaru claimed to have killed at least six people, kidnapped dozens, and destroyed several vehicles during an ambush along the Kaduna-Zaira highway in Kaduna State. Details remain unclear.

Most attacks take place in northern and North East Nigeria; there has been an increase in insurgent attacks in Borno State. However, there have been a significant number of attacks elsewhere. Significant attacks have occurred in Gombe, Kano, Kaduna, Jos and Bauchi States and in the Federal capital, Abuja. Further attacks are likely. Public places where crowds gather have been targeted, including places of worship, markets, shopping malls, hotels, bars, restaurants, football viewing centres, displacement camps, transport terminals, government buildings, security and educational institutions (schools, further education colleges and universities are all regular targets), and international organisations. Attacks have taken place around religious and public holidays in public or crowded places, including places of worship as well as during election periods.

You should avoid places where there are political or other large public gatherings. Be vigilant, remain alert and pay attention to your surroundings at all times. You should follow local news reports and be alert to developments particularly around religious and public holidays. A heavy security presence often indicates areas of particularly high risk. You should avoid affected areas in the immediate aftermath of an attack. You should avoid regular patterns of travel or movement, and aim to only travel during daylight hours.

2. Benue. July 11, 2021, some residents from Ipav and Yandev villages in Gboko LGA clashed over land tussle around Tarukpe Market area at Yandev, injuring unconfirmed number of persons and thirty houses were vandalised in the fracas.

3. Nasarawa. July 5, 2021, at 1650 hours, armed kidnappers shot sporadically as they invaded a quarry site at Ugya village in Toto LGA, killing one person and kidnapped one other.

5. Plateau. July 5, 2021, gunmen doubled crossed a lawyer while driving along Little Rayfield road in Jos, Jos North LGA and kidnapped the lawyer. The kidnapped lawyer was released by his abductors on July 6, 2021.

6. Plateau. July 5, 2021, at 1630 hours, gunmen suspected to be herdsmen attacked, firing gunshots at the vehicle of a traditional ruler at Miango community in Bassa LGA. No casualty was reported.

7. Kogi. July 11, 2021, at 1600 hours, gunmen shot sporadically in an attack at Iruvucheba village in Okene LGA, killing one person and injuring one other. The attackers also kidnapped one person, believed to be a pharmacist in the village.

9. Niger. July 6, 2021, at 1025 hours, suspected armed criminals shot sporadically in an attack at Manta village in Shiroro LGA, stealing goods and other valuables.

12. Osun. July 5, 2021, at 1345 hours, armed men intercepted a commercial vehicle at Imesi Ile town, along Ila Orangun Road in Obokun LGA and kidnapped four passengers. Policemen and local vigilante members tailed and rescued all the kidnapped victims. One vigilante member was killed, and one policeman was injured during the rescue.

13. Ondo. July 6, 2021, armed robbers attacked and robbed residents of their belongings around Oshinle junction inwards Hospital Road in Akure. The robbers also hijacked a vehicle in the area.

14. Ondo. July 6, 2021, policemen foiled a robbery operation as armed robbers invaded a bakery around Okuta Elerinla area in Akure South LGA. Policemen tailed the robbers to Igbara-Oke area in Ifedore LGA and killed one suspect while one other was arrested.

15. Oyo. July 7, 2021, a fulani leader was reportedly kidnapped at his residence by gunmen at Lanlante village in Ibarapa East LGA.

16. Oyo. July 10, 2021, gunmen suspected to be herdsmen killed two persons and injured two others in an attack at Akinkunmi community in Akinyele LGA.

20. Lagos. July 8, 2021, unidentified gunmen shot and killed one person during a political rally of the All-Progressives Congress (APC) party at Agboju area, near Festac Town in Amuwo-Odofin LGA.

25. Kaduna. July 11, 2021, at 0010 hours, gunmen shot sporadically in an attack at the Palace of a traditional ruler around Ungwar Aku area at Kajuru town in Kajuru LGA, killing two persons and kidnapped eleven others including the tradition ruler.

28. Zamfara. July 5, 2021, suspected armed criminals attacked and exchanged gunfire with troops of the Nigerian Army in an attack at Marke village in Tsafe LGA, reportedly killing seven soldiers and injuring five others. The attackers burnt five patrol vans and stole seven AK47 rifles, one AA gun, one PKT gun and two radios from the soldiers.

31. Zamfara. July 11, 2021, at 0200 hours, the provost of the College of Arts and Animal Science, Bakura was kidnapped alongside two persons at their houses by gunmen at Bakura town in Bakura LGA.

35. Bauchi. July 5, 2021, two armed robbers attacked and robbed some pedestrians of their money and phones at Yelwa area in Bauchi town. The two suspects were arrested by the police.

36. Bauchi. July 7, 2021, at 2000 hours, gunmen riding on two motorcycles intercepted and kidnapped a State Chieftain of the All-Progressives Congress (APC) party while driving around CBN roundabout, along Federal Low-cost Road in Bauchi town.

38. Yobe. July 8, 2021, at 1000 hours, suspected Boko Haram militants shot sporadically in an attack at Katarko town in Gujba LGA, injuring two persons. The militants stole foodstuffs and other valuables. Troops of the Nigerian Army later repelled the attack while engaging the militants in a gunfire.

39. Taraba. July 5, 2021, gunmen suspected to be herdsmen attacked and killed three farmers on their farmland at Kudi community in Bali LGA.

41. Delta. July 5, 2021, at 2230 hours, armed robbers attacked and robbed some residents of their belongings at Agbarha-Otor community in Ughelli North LGA.

43. Edo. July 6, 2021, one person was kidnapped by gunmen while driving along Benin-Abraka road near Ugboko community in Orhionmwon LGA.

45. Imo. July 5, 2021, at 1430 hours, policemen exchanged gunfire with suspected kidnappers in a raid at a forest near Ehime Mbano town in Ehime Mbano LGA, killing one suspect and injuring one policeman. The police rescued one kidnapped victim and recovered one pump action gun, five live cartridges and six expended cartridges from the suspects.

46. Imo. July 8, 2021, armed suspected thugs invaded the Imo State House of Assembly in Owerri Municipal LGA and shot sporadically following the suspension of six lawmakers, including the former leader of the House. No casualty was reported.

48. Enugu. July 7, 2021, at 1600 hours, unidentified gunmen shot and killed the Managing Director and Chief Executive Officer of Scientific Equipment Development Initiative (SEDI) and his police orderly in transit around Centenary Estate, along Enugu/Port-Harcourt expressway in Enugu

Uplifting The Underprivileged In True Sense